Somehow we blinked, and another year has flown by.

Joe was busy in the garden last year and while home on maternity I created more work for him by getting the front yard ready for sprinklers. It was a big to do, but happy we did it. Along with sprinklers in the front, we laid sod in both front and backyards and had some huge help from a local gardening company to set up a play area (rock box) under the Japanese Maple and a gravel path in the backyard.

Having two very young children has changed how we use our time, and two kids in full time daycare in Portland is good way to hemorrhage money.

This year we were approached, however, to put our house on tour. SHOULD WE?
Would you come visit and tour our home, as part of the Irvington Home Tour in May?
Let me know, it's a lot of work and gives me anxiety as we aren't close to done (but will we ever, be truly, "DONE"?) 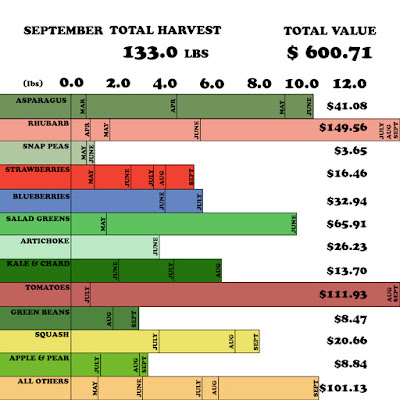 Summer has officially ended and so too has the majority of my crops.  All that is left as of Oct 1 are a handful of Green beans and a couple of winter Squash (they did not do so hot for me this season).  The hops got harvested at the end of September which shows the big bump in the "Other" category.  Otherwise it was a slow month in the garden.  Tomatoes have not died off yet but they are very slow to ripen with the shorter days.

All in all this season has been extremely useful to both plan my garden and have an understanding of the value of the entire garden but also the individual crops.  The biggest piece I learned though is the monetary piece is insignificant compared to the joy of watching your child eat a strawberry off the bush after school or to cook with your own hard earned produce.

The other interesting piece is how skewed the numbers can become.  The larger crops, rhubarb in particular are impossible to use in their totality.  I likely gave away over half of the crop through out the summer.  Similarly Tomatoes come on so quickly all at once that I now have a sash of frozen Sauce in the freezer. Hops too are not as lucrative as they appear since I do not brew enough beer to utilize all of them but they also provide a great screen to our porch.  In short the big winners in my book as far as most productive and useful crops are definitely Garlic, tomatoes, and lettuce.  But I ended up having an extra abundance of all of these!  The key for me having spent so much time tracking crops this summer is diversity, it is just fun to always have something different to harvest!

Am I going to continue this next year?  Likely not.  It has been a lot of work weighing everything, and micromanaging the garden.  However, I learned a lot doing this and I definitely am going to enjoy my garden next season in a different kind of way, through my kids!  I already have plans for a more elaborate pumpkin patch and a green bean T-pee!

As always I am happy to answer anyone's questions and I even plan to get a bit more particular in my spreadsheet and look at calories and some other metrics of evaluation.


Posted by Joe Swank No comments: 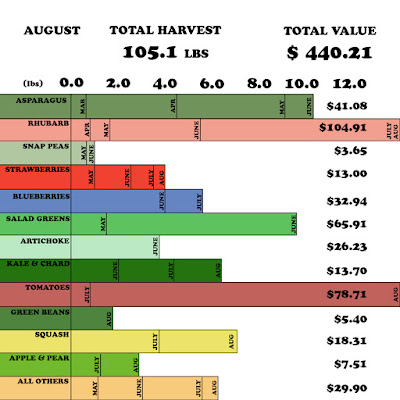 August has been by far the most productive month yet!  There was over 40 lbs of produce from my yard this month!  Granted this was limited really to it being tomato season, but I will take it because they are so versatile and good!  We have made fresh salsa, caprese, and a couple batches of tomato sauce not to mention the cherry tomatoes that I can eat alone daily as a snack.
Rhubarb, while I enjoy it, has started to be the bane of my existence.  I have 1 plant and it has already yielded 21 lbs of Rhubarb.  I have used my fair share for desserts and have definitely given a lot of it away and I still have a couple of pounds every week.  Relentless is the only word I have for that plant!
The really exciting thing to me is the two perfect pears I got off of my espalier pear tree.  They are only 1 year old so I am looking forward to this and it's apple counterpart for many years to come.

All in all when you look at the money side of it Rhubarb is at the top of the list as one might guess.  But tomatoes are definitely proving to be worth the investment!  The tomato number should continue to climb barring a cold snap.  I still have a lot on the bush!  See below for the list of current value per SF with cost factored in:

I have been a bit disappointed with my winter squash as I only have a few on the vines, but it is only September so we will see how those progress.  Looking forward to an Indian summer and a few more fleeting weeks of Tomatoes!!!

Posted by Joe Swank No comments: 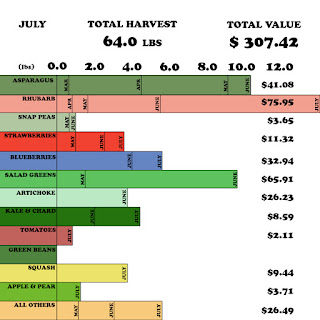 July has again been a hot month!  But all the efforts for maintaining all these plants are really starting to pay off.  Blueberries are unfortunately about spent but I got some tremendous yields from my mature plants.  Once the others "grow up" I should be double what I got this year!  Strawberries have continue to produce in very small quantities.  Zucchini has also come on strong this month and I definitely have more than I really know what to do with!  Zoodles anyone?

Rhubarb is now the king as far as value per sq ft of garden space at $8.03 a sq ft after cost.  The issue with this is that I can't use this much Rhubarb!  Majority of my crop gets donated to a friend who gives e rhubarb syrup in return.  It is delicious.  Lettuce and Garlic are the next two big winners as far as money at $7.74 a sq ft and $7.03 a sq ft respectively.  The only things left in the yard with possibility of trumping these are tomatoes, green beans, and possibly squash.

Tomatoes are just now coming on and it has to be the most versatile and delicious thing to actually cook with.  No green beans yet but in a week or so I suspect I will have more than I know what to do with of those as well.  Also harvested my first Fava bean crop and I'm hooked.  They are a pain to hull but taste so good and are good for the soil as I understand.  They were a piece of cake to grow so I resowed my raised beds with a bunch to see if I can eek out 1 more harvest or if not supposedly they will winter over.  Either way they are good for the soil apparently.

I have a bunch of figs on the tree also but they do not seem to be getting ripe!  Anyone know where I can find a fig wasp?

Posted by Joe Swank No comments: